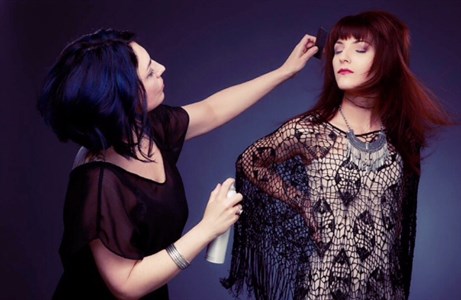 As a kid growing up in Texas, Sheila had her heart set on becoming a hairdresser. For her 13th birthday present Sheila asked her parents for a haircut from FASCINATION, the trendy hair salon at the mall. She had been altogether obsessed with that place, the 80's pop music playing, and smell the hairspray from outside the salon's doors. It had an energy that was intoxicating to the almost teenage Sheila MaBelle. That birthday present was one she would remember always. Fascination had lived up to all her expectations.
Sheila's own fasciation with hairdressing continued to grow from that day on. It wasn't very long before Sheila took a pair of shears into her amateur hands had became the hairdresser to her family and closest friends. She knew one day she'd be a real hairdresser.

In 2002 Sheila moved to Atlanta and began working for TONI&GUY-TIGI INTERNATIONAL, specializing in cutting and styling. Her 16 years with TONI&GUY afforded her with one of the industry's top advanced education programs as well as ongoing training in her specialty. Sheila fortunately found herself training under the guidance of masters of the craft. Soon she was working along side of her mentors, it was a privilege as well as a great opportunity. Sheila was challenged to develop her artistry and creative vision.
Throughout her time there Sheila continued to grow in the ranks, while setting new goals and developing her hair dressing skills . After 10 years with the company Sheila received an "Award of Excellence" and was advanced to Creative Director, both of which were goals she had set for herself during her apprenticeship.
(404)249-1661